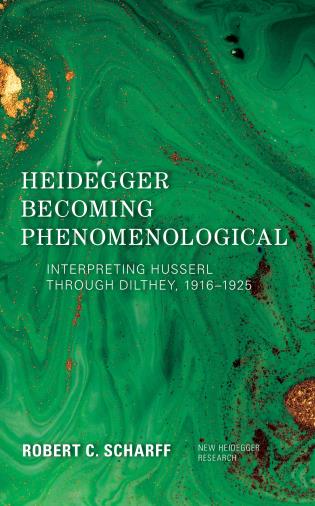 In this first book-length study of the topic, Robert C. Scharff offers a detailed analysis of the young Heidegger’s interpretation of Dilthey’s hermeneutics of historical life and Husserl’s transcendental phenomenology. He argues that it is Heidegger’s prior reading of Dilthey that grounds his critical appropriation of Husserl’s phenomenology. He shows that in Heidegger’s early lecture courses, a “possible” phenomenology is presented as a genuine alternative with the modern philosophies of consciousness to which Husserl’s “actual” phenomenology is still too closely tied. All of these philosophies tend to overestimate the degree to which we can achieve intellectual independence from our surroundings and inheritance. In response, Heidegger explains why becoming phenomenological is always a possibility; but being a phenomenologist is not. Scharff concludes that this discussion of the young Heidegger, Husserl, and Dilthey leads to the question of our own current need for a phenomenological philosophy—that is, for a philosophy that avoids technique-happiness, that at least sometimes thinks with a self-awareness that takes no theoretical distance from life, and that speaks in a language that is “not yet” selectively representational.
Robert C. Scharff is Professor of Philosophy Emeritus at the University of New Hampshire and Executive Director of ITERATA, a non-profit institute for the study of interdisciplinarity in science, industry, and higher education. He is author of How History Matters to Philosophy (2015), Comte After Positivism (2002), and numerous papers on 19th and 20th century positivism, postpositivism, and continental philosophy; co-editor (with Val Dusek) of The Philosophy of Technology (2003, 2014); and former editor of Continental Philosophy Review (1994–2005).
Odkaz na stránky vydavatele.